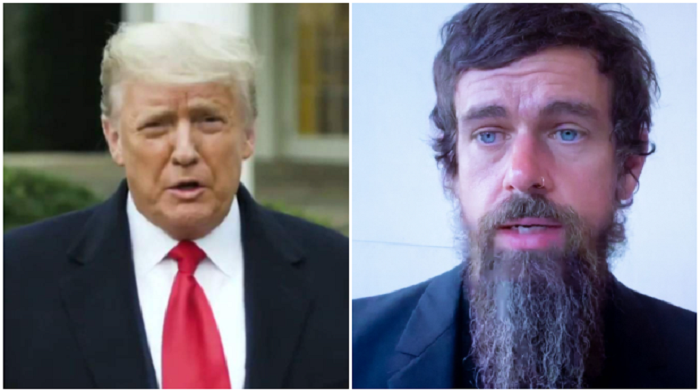 Big tech giants Twitter and Facebook have blocked President Trump from sharing messages with his followers, with at least one platform threatening a permanent ban.

The move comes following violence at the Capitol on a day that resulted in four deaths and 52 arrests.

President Trump posted a video to his social media accounts in which he urged supporters to “go home” and added sympathy for those upset about the integrity of the 2020 presidential election, further alleging it had been stolen.

President Trump puts out a video asking protestors to leave and go home, peacefully, and Twitter censors the video and makes it so it can’t be shared. pic.twitter.com/CAgRdIwDfC

Facebook announced to staff through an internal memo that the President’s video had been removed.

“We’ve assessed two policy violations against President Trump’s Page which will result in a 24-hour feature block, meaning he will lose the ability to post on the platform during that time,” they stated.

Zuckerberg just sent out an internal post/memo to employees. here’s the Text below: pic.twitter.com/TYvgvvaJIg

Twitter, meanwhile, demanded President Trump remove three tweets and explained they had locked his account for 12 hours following their removal.

“If the Tweets are not removed, the account will remain locked,” they threatened.

Future violations of the Twitter Rules, including our Civic Integrity or Violent Threats policies, will result in permanent suspension of the @realDonaldTrump account.

Facebook has further announced that President Trump’s ban will extend all the way through Joe Biden’s inauguration.

Again, a video in which the President urges his supporters to go home and in peace is being banned on social media because, as Facebook vice president of integrity Guy Rosen suggests, it “contributes to rather than diminishes the risk of ongoing violence.”

Additionally, businesses associated with the President are being deplatformed.

Twitter Actively Allows Promotion of Violence on Its Platform

It should be noted that while Twitter hides their obvious censorship behind a veil of “civic integrity” they allow violence from other sources.

Tweets by Iranian leader Ayatollah Ali Khamenei, for example, calling for arming Palestinians, destroying Israel, and calling for “Jihad” remain on the platform.

This barbaric, wolflike & infanticidal regime of #Israel which spares no crime has no cure but to be annihilated. 7/23/14#HandsOffAlAqsa

1. The struggle to free #Palestine is #Jihad in the way of God. Victory in such a struggle has been guaranteed, because the person, even if killed, will receive “one of the two excellent things.” Also, crimes against Palestine trouble any human’s conscience & inspire opposition.

Trump has argued Section 230 “is a liability shielding gift from the U.S. to Big Tech.”

He suggested it “is a serious threat to our National Security [and] Election Integrity,” a point ultimately proven correct as social media platforms continuously censored the President and his supporters leading up to the 2020 contest.

“Our country can never be safe [and] secure if we allow it to stand,” the President said.

If we allow censorship and the First Amendment to fall, there won’t be a country left to keep safe and secure.

Trump Vows There Will Be An ‘Orderly Transition’ Of Power On January 20th, Promises To Keep Fighting Election Outcome