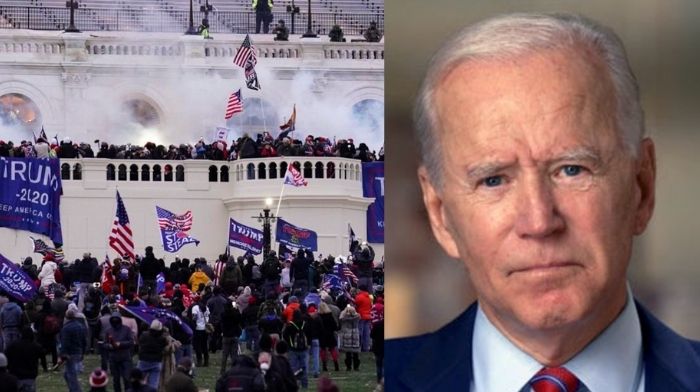 Biden said in a speech, “They weren’t protesters — don’t dare call them protesters. They were a riotous mob, insurrectionists, domestic terrorists.”

What we witnessed yesterday was not dissent — it was disorder.

They weren’t protestors — they were rioters, insurrectionists, and domestic terrorists.

I wish we could say we couldn’t see it coming, but that isn’t true. We could.

Biden: Trump Has Contempt For Democracy

Biden made his comments during an event in Wilmington, Delaware, where the President-elect introduce his nominations for the Department of Justice.

Biden said that no one should be surprised by Wednesday’s chaos.

“I wish we could say we couldn’t see it coming, but that isn’t true … the past four years we’ve had a president who’s made his contempt for our democracy, our constitution, the rule of law clear in everything he has done,” Biden said.

The President-elect said that Wednesday in Washington, DC was one of the “darkest days” in American history describing it as “an assault literally on the citadel of liberty.”

Biden calls yesterday “one of the darkest days in the history of our nation” and “an assault on the rule of law.” He says “don’t care call them protesters; they were a riotous mob, insurrectionists, domestic terrorists. It’s that basic, it’s that simple.”

Biden also claimed Capitol Police did not to carry out “equal justice” by allowing the protesters to enter Congress.

He used a photo given to him by his granddaughter, Finnigan Biden, that showed military soldiers guarding the Lincoln Memorial from Black Lives Matter protesters over the summer.

Biden said, disapprovingly, “No one can tell me that if it had been a group of Black Lives Matter protesting yesterday, they wouldn’t have been treated very, very, differently than the mob of thugs that stormed the Capitol.”

Biden blamed Trump for harming American democracy, saying, “Yesterday was but the culmination of that unrelenting attack.”

The President-elect also accused Trump of “trying to use a mob” to overturn 160 million votes cast in 2020.

“Our Democratic institutions are not relics of another age, they’re what sets this nation apart, they’re the guardrails of our democracy, and that’s why we have no president that’s a king,” Biden said.

Biden: “They weren’t protestors. Don’t dare call them protestors. They were a riotous mob…Domestic terrorists.”

Is There A Reason For Using This Type Of Language?

Biden’s use of “domestic terrorists” finds its place post-Capitol Hill protest along with words like “insurrection,” “coup,” and “sedition.”

Some have speculated that framing the events in such a way could be followed by a crackdown on civil liberties under a Biden administration.

As the Biden-Harris administration prepares to take office, urgent action is needed in their first 100 days — and beyond — to protect and extend the rights and liberties enshrined in our Constitution.https://t.co/XHwfJcnXfs

Noting that the Capitol Hill protest is being described by powerful Democrats as a ‘terrorist’ act, Greenwald added, “Beyond raising alarms about civil liberties erosions, I also often insisted that the underlying causes of terrorism aimed at the U.S. should be considered if for no other reason than to understand how to address it without destroying core liberties for Americans.”

Those core liberties are featured in the Bill of Rights and belong to all Americans.

Pray that we never lose them – especially when they are in danger in times of fear.