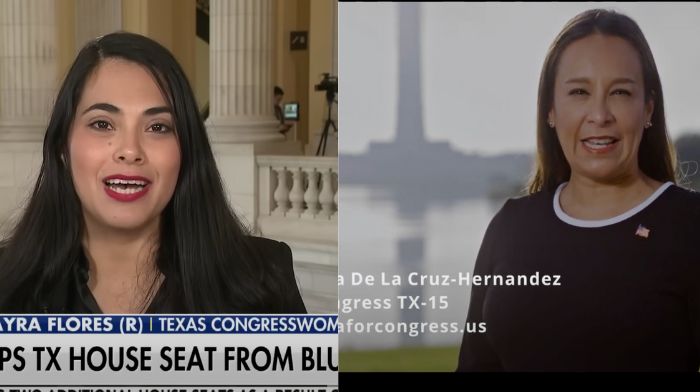 The 2022 midterm election this November has Democrats scared like never before. While some Democrats openly admit that their chances this fall look bad, there are also other signs of their fear.

One of those signs is coming in the form of Republican Hispanic women surging not only working to get GOP candidates elected, but becoming candidates themselves in congressional districts along the U.S. southern border. One of them has already won a special election, prompting Democrats to label them as “far right.”

“These people literally want to send me back to Mexico,” said @MayraFlores2022 of attacks by the “far-Left,” after The New York Times labeled her a “far-right Latina.” #TheBennyReport @bennyjohnson pic.twitter.com/lorwdt7s86

Not Supposed To Happen

Maya Flores’ win in a special election last month in Texas 34th congressional district has Democrats reeling. Flores flipped a district that had not sent a Republicans to Washington for over 100 years.

Two other Hispanic women are on the ballot as Republicans in high profile races this November as well. Monica De La Cruz will face progressive Democrat Michelle Vallejo, and Cassy Garcia will go up against Rep. Henry Cuellar (D-TX).

In the meantime, Democrats are doing their best to portray not just Flores, but De La Cruz and Garcia as “far right.” In what could become the litmus test for Democrats, during a recent interview, Flores was asked if she believed that Joe Biden was “the legitimately elected president.” She replied, “He’s the worst president of the United States.”

The Rio Grande Valley has become a battleground area of sorts for Democrats with the election of Flores. The population is largely Hispanic, and has traditionally voted Democrat. But it is a place that upholds conservative values. Residents go to church and fly American flags. All three have campaigned together on the values of God, family, country.

The plight of conservative and Republican hispanics mirrors that of other minority conservatives. In the past, Texas Senator Ted Cruz has not been afraid to call Democrats out on what he referred to as the “pigeon-holing” of minority candidates.

“For Democrats, they put you in that little box where they sort of pat you on the head and ‘okay you’re the Hispanic guy. You’re the African-American guy. You’re running as the women’” said Cruz.

When a socialist Hispanic says crazy things like the world is going to end in 9 years, she’s a “Political Star.”

When @CasandraLGarcia says she’s pro-life and attends church, they call her a “Far-Right Latina.” pic.twitter.com/dXGeDGWZoq

Texas Not Democrats Only Problem

Hispanic women running as Republicans are not just a problem in Texas for Democrats. In Virginia, law enforcement officer Yesli Vega, whose parents fled El Salvador, will face off against incumbent Rep. Abigail Spanberger (D-VA) in November.

Rep. Carlos Gimenez is a freshman House member representing Florida’s 26th congressional district and is running for reelection in a state that is becoming increasingly red. He is also very straight forward about why Hispanics may be taking a second look at the GOP.

In New Mexico, in the State House where Democrats hold a 45-24-1 majority, a record number of 18 Hispanic Republican candidates are are vying for seats there. New Mexico Republican Party Chair Steve Pearce says,

According to the New York Times, a “far-right Latina” is someone who goes to church and believes in religious freedom, strong borders, school choice, and protecting life.

Hispanics are rejecting the Democrat Party in droves and this is how you know that they are terrified. pic.twitter.com/h5qysgB9cu

RELATED: WATCH: Pete Buttigieg Defends Husband For Mocking Brett Kavanaugh After He Was Forced By Protesters To Flee Restaurant

Hispanics are leaving the Democrat party in droves. Poll numbers for Hispanics from May show that a mere 26% of Hispanics approve of Joe Biden’s job performance. The economy and illegal immigration are top concerns for Hispanic voters.

Rep. Flores and other Hispanic candidates are responding to Democrats insistence that belonging to a certain group automatically makes you a Democrat for life. Flores responded in a tweet saying, “It amazes me that because my values are rooted in God, Family, and Country, the liberal media takes it upon themselves to attack me and label me ‘far-right.’”

De La Cruz also summed up the reason for the exodus of Hispanics from the Democrat party, saying that “Hispanic culture really aligns with pro-life, pro God, and pro country. Those are the values of the Republican party. Democrats have just simply gone too far to the left and towards socialism.”

Garcia had a warning for Democrats,“The red wave is here.”

It amazes me that because my values are rooted in God, Family, and Country, the liberal media takes it upon themselves to attack me and label me ‘far-right’. But at least they used the word ‘Latina’ over their other made-up terms. Seguimos Adelante! pic.twitter.com/l03Nez3FcP

The move by Hispanics to the Republican party may prove to be beneficial for Florida Gov. Ron DeSantis, especially if he decides to throw his hat in the ring for president in 2024. His favorability among Hispanics has risen from 39% in December 2021, to 46% in March.