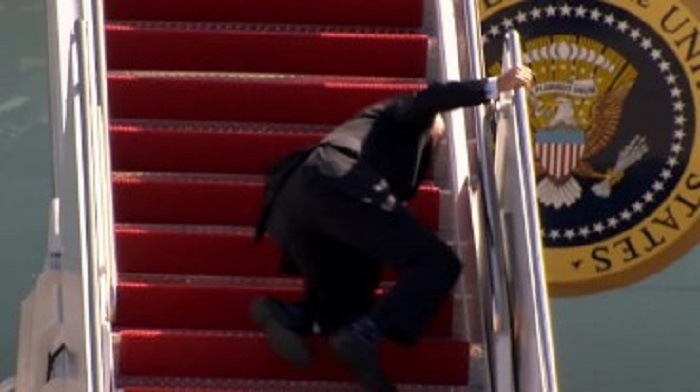 A New York Times/Siena College poll is delivering some shockingly bad numbers for President Biden and indicating a vast majority of Democrats don’t want him to run again in 2024.

The latest poll suggests those within his own party aren’t celebrating Biden’s decision to seek a second term. The New York Times describes the lack of support from his own party as “an alarming level of doubt.”

“64 percent of Democratic voters,” according to the newspaper, say “they would prefer a new standard-bearer in the 2024 presidential campaign.”

Meanwhile, Biden’s approval rating just hit another all-time low and his net approval – the difference between his approval and disapproval ratings – is also at its lowest point ever. pic.twitter.com/Z87EzvZRVM

Those who want to see a fresh face running on behalf of the Democrat party offer several reasons why they’ve soured on Biden. Chief among those reasons is age, with 33% saying that is why they want somebody younger to run.

Not far behind that is, quite expectedly, job performance, with 32% saying that is why the ticket needs a substitute at the top.

In the same poll, voters overall “have soured on [Biden’s] leadership” they reveal, “giving him a meager 33 percent job-approval rating.”

Biden at 33 percent approval in a new New York Times poll. Nearly two-thirds of Democratic voters want a Plan B in 2024. It’s impossible to see how the president reverses this slide if he isn’t willing to fire anyone in his inner circle (See: Klain, Ron). https://t.co/ZeNnCNtLrQ

RELATED: Down In The Dumps! Biden Is The Most Unpopular President Since Tracking Began In 1945

Needs a Cheat Sheet on How to Act

President Biden was the subject of some mockery concerning his age when cameras last month showed him carrying a cheat sheet provided by aides with some hilariously simple directions to follow.

Among those instructions were advisements for Biden to:

Can you even fathom if they had to tell trump to sit down for a meeting https://t.co/8AaShp0kda

A report by the New York Times last month also indicates “dozens of frustrated Democratic officials, members of Congress and voters” have “expressed doubts about the president’s ability to rescue his reeling party and take the fight to Republicans.”

In that same piece, David Axelrod, the former chief strategist for Barack Obama’s 2008 and 2012 presidential campaigns, openly worried about Biden’s age should he run in 2024.

“The presidency is a monstrously taxing job and the stark reality is the president would be closer to 90 than 80 at the end of a second term, and that would be a major issue,” said Axelrod.

When David Axelrod says Biden “looks his age and isn’t as agile in front of a camera as he once was,” he’s saying what everyone knows to be true. That’s why these stories pivot to who else the Democrats could run in 2024 if Biden doesn’t seek reelection https://t.co/V8eex44fvv

Representative Alexandria Ocasio-Cortez (D-NY) was recently questioned as to whether or not she’d support President Biden in 2024 but refused to answer, instead insisting she’d “look into it” when the time comes.

The New York Times report on the new poll also shows only 13 percent of Americans feel the nation is on the “right track” currently, the lowest number since the ‘Great Recession.’

The Times also lists a number of dismal indicators as to why President Biden is so deeply unpopular including – His inability to inspire, his age, and a “sense of frustration” within the White House.

Watch: Pete Buttigieg Defends Husband for Mocking Brett Kavanaugh After He Was Forced by Protesters to Flee Restaurant