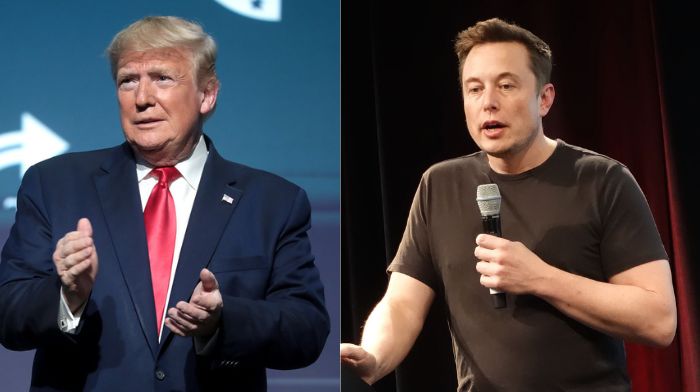 If Donald Trump decides to make another run for the White House in 2024, he may not receive many campaign donations from SpaceX and Tesla CEO Elon Musk.

Did He Or Didn’t He?

Trump continued, “I said, ‘I didn’t know that,’ He told me he voted for me, so he’s another bullshit artist.”

Trump attacks Elon Musk at his rally in Alaska: “He’s another bullshit artist.”

The world’s richest man seems to be all over the place.

According to a report from The Hill, Federal Election Commission information confirmed that Musk had donated to Hillary Clinton’s campaign in 2016.

That’s quite the turnaround.

Exactly. Trump predicted 2 months ago that Musk would back out of the deal. Trump posted that on his social platform, Truth Social. I cannot think of one time, starting with his announcing his 1st candidacy for President, that Trump has ever been wrong with any prediction.

Late on Friday, Musk announced he was calling off his bid to buy social media giant Twitter for an estimated $44 billion. Musk argues that the company failed to disclose crucial information about the company.

In addition to hitting the campaign trail for Alaska’s GOP candidates, Trump has endorsed many candidates during the 2022 primary season, and so far has a winning track record.

In the latest round of primaries, Trump candidates won in Alabama, Illinois, Utah, Colorado, and Oklahoma, proof that a Trump endorsement is still highly sought after. In the heated Senate race in Missouri to replace retiring Senator Roy Blunt (R-MO), Rep. Vicky Harzler (R-MO) recently sought Trump’s endorsement in her bid for that Senate seat but did not receive it. So far, Trump has not endorsed a candidate in that race.

Even after the verbal attack on Musk, Trump did say, “Who the hell knows what’s going to happen? He’s got a pretty rotten contract. I looked at his contract, not a good contract.”

Musk had previously stated that should the deal go through, he would reverse Trump’s ban from Twitter. However, all drama between Elon Musk and Twitter will now apparently move to the courtroom. Stay tuned.

Comedian Father of 12 Gives Parents Some Tips For Holiday Shoppping

As Georgia Runoff Begins, Some Republicans Are Already Bracing For Bad News