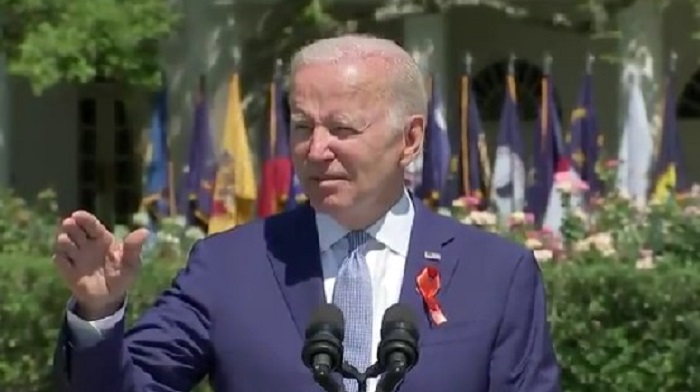 The father of a victim of the Parkland school shooting interrupted President Biden’s speech celebrating the passage of a bipartisan gun control bill – and was told by the President to “sit down.”

The incident took place as Biden delivered remarks at an event commemorating the passage of the Safer Communities Act.

Manuel Oliver, the father of Joaquin Oliver, who was one of the victims of the Marjorie Stoneman Douglas High School shooting in 2018, interrupted as the President declared that passage of the bill shows “we can make meaningful progress on dealing with gun violence.”

Oliver disagreed, calling on the White House to “do more” to curb gun crime.

“We have to do more than that!” he shouted.

“Sit down! You’ll hear what I have to say,” Biden shot back before adding, “Let me finish my comment. Let me talk.”

Joe Biden just got heckled at his own White House event:

“Sit down! You’ll hear what I have to say.” pic.twitter.com/2FplghFkjO

RELATED: Mother Who Lost Son To Shooting Slams Anti-Second Amendment Lawmakers: ‘I Don’t Need the Government to Save Me’

Oliver was escorted out of the event after taunting Biden for celebrating his gun control measures, which he believes aren’t enough.

But he made no apologies for causing a scene.

“I have nothing to lose. I don’t have a problem by saying things the way that I say them,” he said during a news conference held by gun control group Guns Down America hours later.

Manuel Oliver to CNN on what he’d tell Biden today: “It’s been a while that I’ve been calling out…using the word celebration, getting together, is like we’re going to a party, to a wedding…it’s not…enough…There was no reason for this event to be called as it’s called[.]” pic.twitter.com/UiZ5ECA7qy

Prior to Biden’s speech, the Parkland shooting victim’s father made it clear he wasn’t pleased with the event being treated like a celebration.

“The word CELEBRATION has no space in a society that saw 19 kids massacred just a month ago,” Oliver tweeted.

“It’s like we’re going to a party, to a wedding today … I really wish there were more in this package of bills,” he continued in an interview with CNN before Biden’s speech.

Oliver has engaged in other stunts in trying to spur President Biden to take even more extreme action when it comes to gun control.

This past February, he climbed a 150-foot crane near the White House and lamented how “45K people died from gun violence” on Biden’s “watch.”

Andrew Pollack, a father who also lost a child, Meadow Pollack, in the Parkland shooting, has placed more emphasis on school safety in solving the problem of shootings in places of education.

“If we all work together and come up with the right idea — school safety,” he said in a powerful speech at the White House in 2018. “It is not about gun laws. That is another fight, another battle. Let’s fix the schools and then you guys can battle it out whatever you want.”

“We need our children safe.”

Andrew Pollack, father of Meadow Pollack: “My daughter has no voice. She was murdered last week. She was taken from us. Shot nine times on the third floor.”

In his speech, Biden pledged to ban ‘assault’ weapons and standard-capacity magazines.

“Assault weapons need to be banned,” he announced.

“I’m determined to ban these weapons again and high-capacity magazines that hold 30 rounds and that let mass shooters fire hundreds of bullets in a matter of minutes,” added Biden. “I’m not going to stop until we do it.”

Fox News reports that interruptions like the one seen during the President’s speech “are rare due to strict security measures at the White House.”