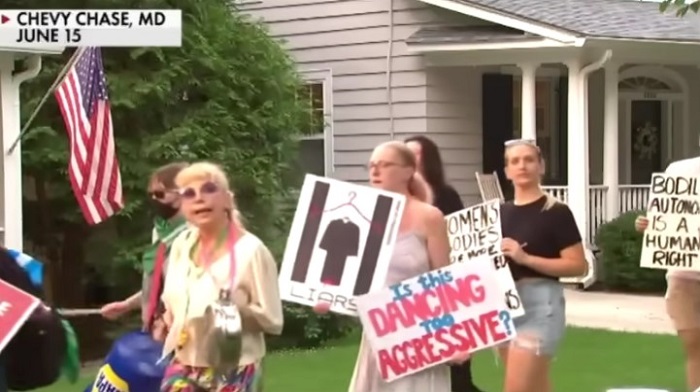 A liberal pro-abortion group whose self-described mission is to “hold officials accountable” is offering a $250 reward to employees of the service industry to report sightings of Supreme Court Justices involved in the ruling to overturn Roe v. Wade.

The group – known as ShutDownDC – tweeted their offer which involves $50 for a confirmed sighting, followed by the balance if the justice is still in the location 30 minutes after they were snitched on.

The reward seems to be a fairly obvious attempt to allow enough time for their band of protesters to descend on the location and harass the justice in question.

DC Service Industry Workers… If you see Kavanaugh, Alito, Thomas, Gorsuch, Coney Barrett or Roberts DM us with the details!

We’ll venmo you $50 for a confirmed sighting and $200 if they’re still there 30 mins after your message. https://t.co/xXWZ5JZiE7

RELATED: Pete Buttigieg Defends Husband for Mocking Brett Kavanaugh After He Was Forced by Protesters to Flee Restaurant

The offer of a reward for such sightings is an indication that ShutDownDC has no intention of letting up on public harassment of Supreme Court Justices.

The same group was behind last week’s incident with Kavanaugh at Morton’s Steakhouse in Washington, D.C. where protesters learned that he was dining there and swarmed the entrance before calling the manager “to tell him to kick Kavanaugh out.”

The group boasted that they had forced him to exit through the back of the building.

We hear Kavanaugh snuck out the back with his security detail. @mortons should be ashamed for welcoming a man who so clearly hates women.

Kavanaugh was also the victim of an alleged assassination attempt recently.

A Washington Post report indicates Morton’s has received backlash after the incident, with protesters making calls and “tying up the phone lines” and “making fake reservations.”

Meaning they’re not only harassing the conservative justices, but they’re also harassing any business that dares to serve them.

How EXACTLY would these miserable miscreants make sure the Justices are “still there 30 minutes after” the mob bosses are alerted?

How does this all end? Why do they feel so emboldened?😒🤦🏾‍♀️ https://t.co/5cd8ENogjv

RELATED: Josh Hawley Slams ‘Antifa Scumbags’ Who Targeted His Home With Wife And Newborn Inside

Democrats, Naturally, Are Encouraging the Harassment

Much as they did with Trump administration officials back in the day, Democrats refuse to condemn the harassment of Supreme Court Justices, downplaying the protests despite their occurrence in restaurants or even at their homes.

Transportation Secretary Pete Buttigieg justified the Morton’s Steakhouse provocation of Kavanaugh because the protesters are “upset.”

“These protesters are upset because a right, an important right that the majority of Americans support, was taken away,” said Buttigieg.

Pete Buttigieg justifies Brett Kavanaugh having to leave a steakhouse after leftist activists descended on the restaurant because “these protesters are upset because a right … that a majority of Americans support was taken away.” pic.twitter.com/qEDXDo5Uul

Representative Alexandria Ocasio-Cortez (D-NY), who is in no position to mock anybody, ever, mocked Kavanaugh for having to flee the restaurant.

“Poor guy,” she sarcastically tweeted. “He left before his soufflé because he decided half the country should risk death if they have an ectopic pregnancy within the wrong state lines. It’s all very unfair to him.”

“I will never understand the pearl-clutching over these protests,” she scoffed in another post.

AOC proved why she belongs nowhere near a House of Congress with that response because:

She’s banking on the fact that you’ll forget that regarding J6 she: Accused @tedcruz of attempted murder, compared it to sexual assault, and admitted to spending months in therapy.

But yea, Republicans are pearl clutching according to this idiot.

ShutDownDC is the same group of liberal activists that Senator Josh Hawley (R-MO) last year labeled “Antifa scumbags” after they protested outside of his home.

Encouraging people to act like ‘scumbags’ is a Democrat tradition. Such actions were especially prevalent under President Trump.

Representative Maxine Waters (D-CA) told her followers to accost Republicans at the grocery store. Leftists attacked Sarah Sanders and Ted Cruz in a restaurant. There is a much longer list of incidents.

The difference here is that the ‘peaceful’ demonstrations have escalated, turning into at least one assassination attempt and numerous attacks on pro-life centers across the country.