There are so many little things that point to Joe Biden and his so-called “presidency” being a complete and total fraud… and they’re piling up all over the place. You have to wonder how a politician who’s supposedly the most popular of all time, also has the lowest approval rating of any politician ever. How do these two things exist together? Well, in reality, they don’t. But in today’s “Clown World” they do… and there’s no explanation for it… the elites just ignore it and never bring it up. And they believe that’s enough to make the problem go away. Insanity, right?


During Biden’s “campaign,” if you even want to call it that, he was stuffed in his basement most of the time, but when his Handlers dragged him out, he was greeted by nobody. The man had zero support. We were told that was because of COVID. Meanwhile, Trump’s venues were overflowing. But just ignore all that, because even though Trump had all the clearly visible support and enthusiasm, Biden was the one winning. Huh? Yeah, I know, it makes no sense.

But even after COVID faded, and before Biden’s poll numbers tanked into the 20s, nobody showed up for him anywhere. He had no visible support of any kind… why? Well, this time the excuse was…”Biden’s supporters aren’t a cult, they don’t need to worship him…” Um, okay. But can they come out and support him? “NO, IT’S NOT A CULT!!!!!!”… these are the types of responses you got to excuse away the fact that nobody visibly supported Joe Biden.

And now, his approvals are so bad, that his Handlers say things like, “Well, Joe was hit by some of the worst luck any president has ever faced, and the American people don’t understand how a lot of this stuff works, so they’re frustrated.” … Yes, they’re blaming “bad luck” and “dumb Americans” now. This is supposedly why you won’t see any visible support for Joe Biden.


But what about online? Surely, Joe is getting some support online, right?

One of my favorite conservative doctors, Dr. Eli David, made a very keen observation about Joe’s latest COVID picture that I think you’ll find very interesting.

Me with only 205K followers commenting on his mask:
➡️ 47K likes

Either I’m very popular or he is very unpopular. I’m afraid it’s the latter 🤡

Me with only 205K followers commenting on his mask:
➡️ 47K likes

Either I’m very popular or he is very unpopular. I’m afraid it’s the latter 🤡
_ pic.twitter.com/hZXkpq6wxe 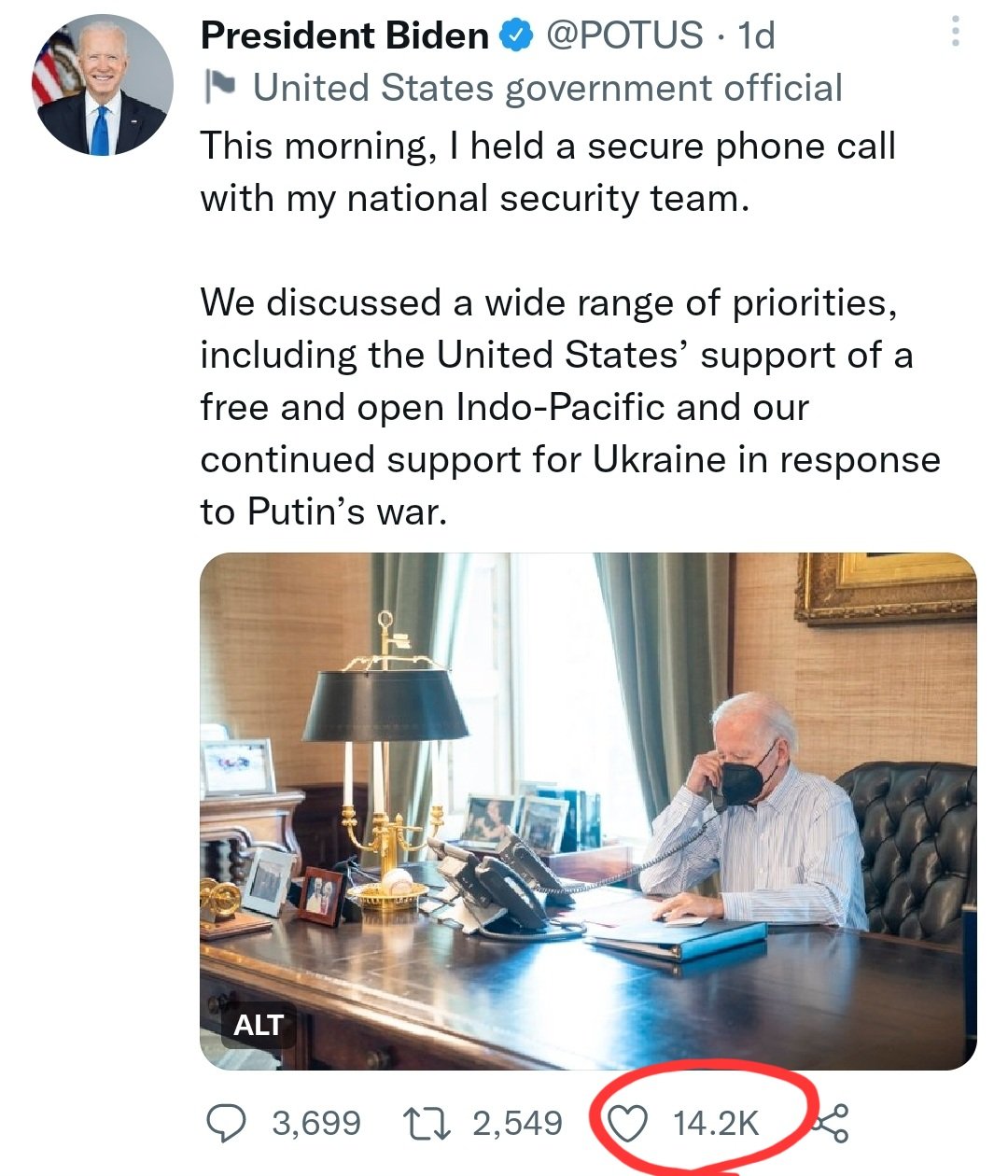 And here’s a photo of Dr. David’s original tweet: 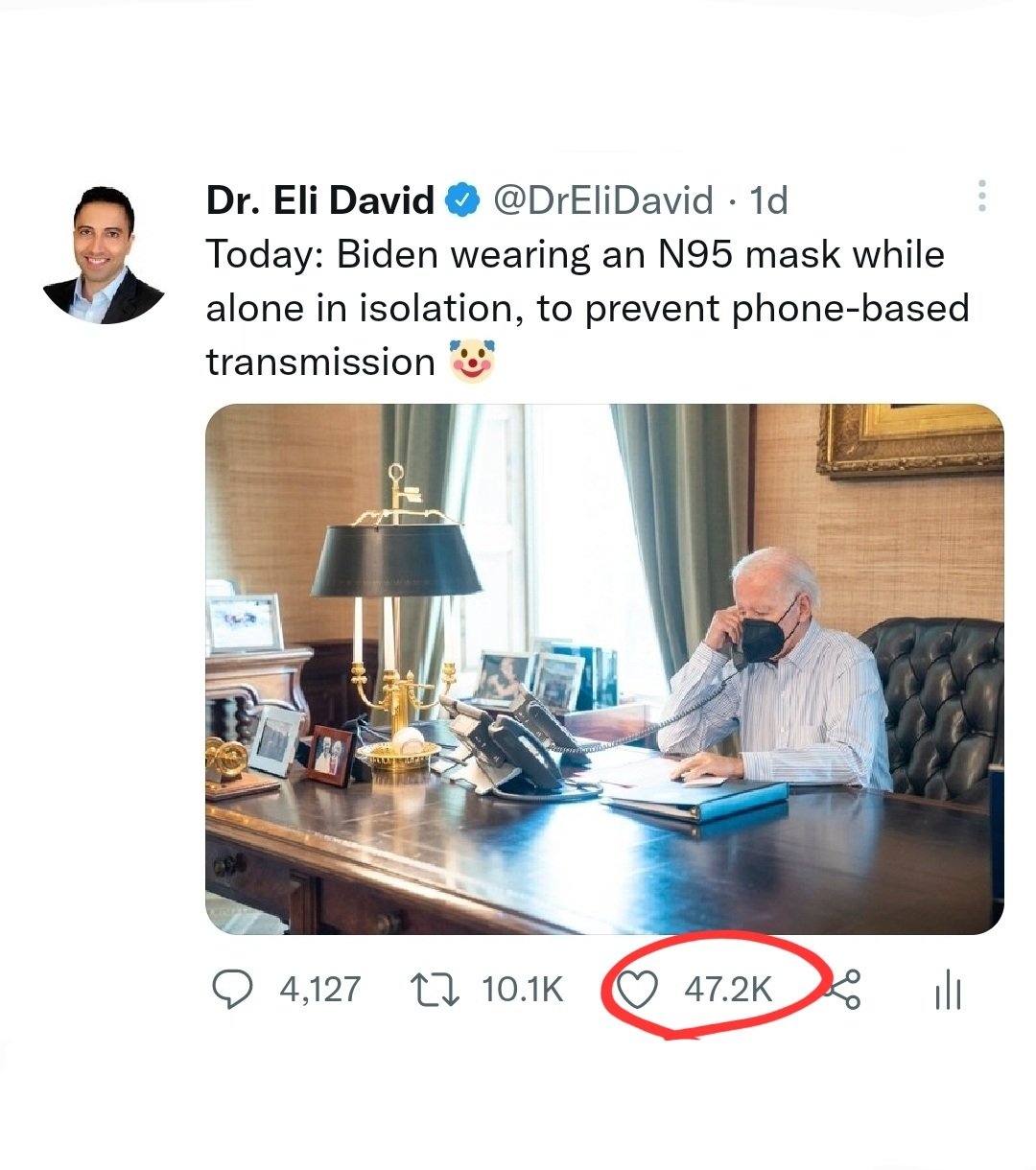 It’s truly remarkable how unpopular Joe Biden has always been with the American people. It’s been this way from the get-go. And no, it’s never been about COVID, or a CULT, or even his bad poll numbers. It’s about Joe… a confused, blathering old man, who’s been in DC for 5 decades, and is still complaining about the same crap today, that he was 50 years ago.

Nobody wanted this ancient relic in office, and you’ll never convince me that he received 81 million LEGAL votes. Never.

The 2020 election was flooded with a tsunami of unprecedented and in many cases illegal mail-in ballots, ballot boxes, and ballot harvesting. Anyone who thinks all of that somehow equals “fair and secure” is an idiot.

One of the most dependable websites for original reporting, investigative reporting, and breaking news in the conservative media is now WayneDupree.com. It is the only group combating communist bias in the media and entertainment, and it is its hard news division.

Because the success of our objective is so important to the economy and because leftist media’s COVID falsehoods probably cost lives, we need your help. Donate to WayneDupree.com today so that we can keep covering stories that the leftist media won’t touch. Your decision to donate $5 per month, $50 per year, or $100 per year will enable us to continue the difficult work of making sure a free and fair media survives in our nation.
[The WDStaff]