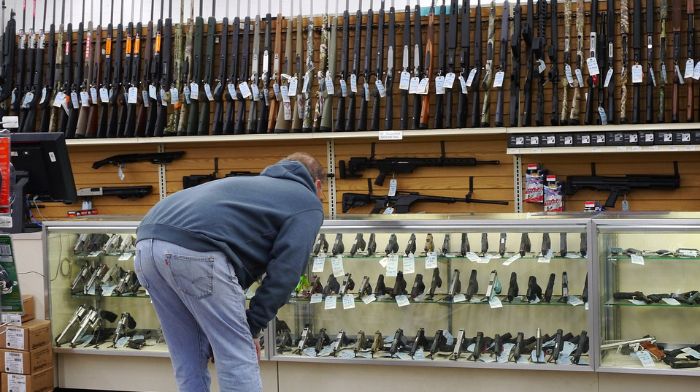 America’s gun manufacturers are not sticking around where they are not wanted. Many of those manufacturers, who have been headquartered in the blue states of the northeast since the founding of the country, are picking up stakes, and moving to more gun-friendly red states.

The latest of those to join the exodus from blue state America is Smith & Wesson, which is moving its headquarters from Massachusetts to Tennessee next year.

RELATED: VIDEO Flashback: Elizabeth Warren To Dad Who Wants Refund After Paying Off Student Loan – ‘Of Course Not’

The final straw for Smith & Wesson came in the form of Massachusetts state lawmakers debating a bill to ban the manufacture of AR-15 rifles. If the bill passed, it would paralyze the company as a hefty 60% of Smith & Wesson’s revenue comes from the sale of AR-15’s.

Smith & Wesson CEO Mark Smith said that the decision to move was “extremely difficult,” but the company was obviously left with no options.

Smith & Wesson is among some 20 gun and ammo producers, including well known names like Beretta, Kimber, and Remington to have made the move to red states, taking thousands of jobs and millions with them.

Massachusetts State Rep. Bud Williams (D) is where Smith & Wesson’s main office is currently located. He stated, “This is where we part ways. And I’ve been a big supporter of Smith & Wesson. But there’s too many mass shootings. I’m not going to be silent.”

John Harris is the executive director of the Tennessee Firearms Association. He easily summed it up: “They’re going where they’re wanted.”

Its about time these gun manufacturers started pushing back!! pic.twitter.com/Xc3S4iIFpE

RELATED: White House Doubles Down, Says ‘MAGA Republicans’ Are ‘Taking Away Our Freedoms’

Not everyone is eager to chase out gun makers or their products. After the horrific school shooting in Uvalde, Texas in may that left 19 children and two teachers dead, a North Carolina school district decided the best course of action would to be proactive and not reactive in the event of a school shooter.

The contrast couldn’t be more stark for a blue state like California, where in June, two Second Amendment groups issued a legal warning to Attorney General Rob Bonta, ordering him to “cease his blatant disregard for the recent Supreme Court decision which effectively overturned California’s ‘May Issue’ permitting scheme.”

The letter was in response to Bonta issuing a legal alert to local officials on recommendations to follow when determining if those who are seeking gun permits were “responsible citizens.”

California was attempting a similar move as New York, where a law that was struck down by the Supreme Court as being unconstitutional violating the Second Amendment. The New York law essentially required residents to “prove” they had a “need” for personal defense.

Smith & Wesson will open their new home in a Tennessee county that declared itself several years ago a Second Amendment “sanctuary.”

This is another infringement on our Second Amendment that the radical Left is pushing and yet another reason we need them OUT of power as soon as possible! https://t.co/L2vEFQQm6A