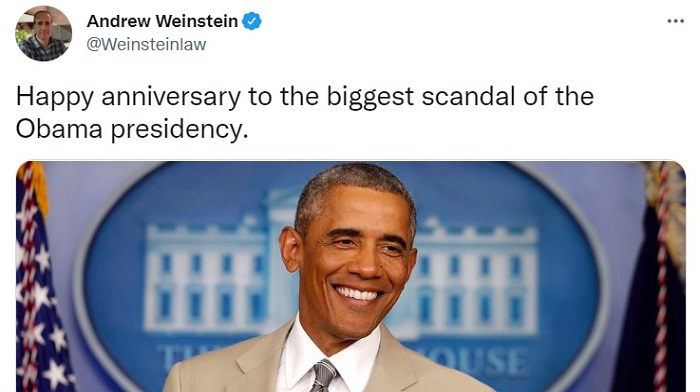 DNC Lawyers Council Chair and former Obama White House appointee Andrew Weinstein was on the receiving end of some major pushback after tweeting a claim that the biggest scandal under President Barack Obama was wearing a tan suit.

“Happy anniversary to the biggest scandal of the Obama presidency.” he tweeted over the weekend.

It’s such a serious point for Weinstein that he tweeted the same exact thing one year earlier.

Happy anniversary to the biggest scandal of the Obama presidency. pic.twitter.com/NloqB6OR13

The ‘tan suit scandal’ has been a consistent lie from the media and the left that Obama’s two terms in the White House were so scandal-free that his choice of fashion was the biggest news to come out of those years.

None of it is true, of course. In fact, the suit ‘scandal’ was a completely media-concocted story to portray conservatives as unreasonable rubes for nitpicking Obama.

The reality is that the media focused on the tan suit because the subject matter during that press conference on August 28, 2014, was a scandal itself, with Obama admitting “we don’t have a strategy yet” to deal with ISIS in the Middle East.

Obama was at the head of many, many scandals. Here are just a few.

bombed weddings, hospitals, and American citizens without due process when he wasn’t spying on them. https://t.co/d7fh9CwrIy

Weinstein’s tweet about Obama’s tan suit being his biggest scandal earned nearly 30,000 retweets and over 230,000 likes. But silly ignorant people like himself weren’t the only ones to take notice and/or share the low-information tweet.

Many people responded by noting the Obama tan suit non-scandal was the least of his efforts, with several focusing on his penchant for killing civilians without due process through drone strokes.

One of the dumbest tweets in the history of dumb tweets https://t.co/3hU98yOfwm

Under the Barack Obama administration, drone strikes that took out civilians were commonplace. In his first week in office, Obama authorized a drone strike that killed nearly a dozen civilians, including a child.

He authorized drone strikes time and again, and even targeted and killed American citizens without charge or trial – like Anwar al-Awlaki and his 17-year-old American son, Abdulrahman.

Heyyyyy, this isn’t a picture of him extra judicially murdering a teenage American boy with a drone strike. https://t.co/q75hGfbB7E

Some might consider Obama’s biggest scandal to be the fact that he rescued Joe Biden from the political scrapheap by nominating him as his Vice President and ultimately leading to the disastrous administration we see today.

President Biden brought the drone tradition back with a vengeance last summer when he launched a retaliatory strike in Afghanistan that killed 10 civilians – including an aid worker and 7 children.

What color was his suit? Probably blood red.

He killed an entire wedding in Yemen https://t.co/dplV7l0ceV

Obama’s Tan Suit Was the Least of His Scandals

It’d be nearly impossible to run off an entire list of the actual scandals Barack Obama encountered during his eight years in the White House. But we can certainly address some of them.

Let’s continue with the theme of drone strikes.

Obama acknowledged in 2016 that “civilians were killed that shouldn’t have been” in past U.S. drone strikes conducted when he was President.

“In the past, there was legitimate criticism that the legal architecture around the use of drone strikes wasn’t as precise as it should have been,” he said. “There’s no doubt that civilians were killed that shouldn’t have been.”

Indeed, a 2013 drone strike in Yemen actually hit a wedding party and killed women and children.

The biggest scandal was actually him wearing this suit to a destination wedding! Google “Obama Yemeni wedding” for more information https://t.co/3lQ4iQeCdO

PBS reported on an October 2015 attack in which “an AC-130 gunship mistakenly hit a hospital in Afghanistan that was run by the charity organization Doctors Without Borders.”

“The group has demanded that the strike be investigated as a war crime,” they wrote. “The Pentagon disciplined several officers and enlisted personnel for their part in the attack.”

But hey, that tan suit was the only problem Obama encountered, eh Mr. Weinstein? Even far-left liberal sycophants aren’t buying it.

Funny meme. But one that ignores so much imperial violence, economic injustice, and political cowardice. But sure. The suit. https://t.co/IrdsX2TAhL

There are, of course, other significant scandals.

That was later named Politifact’s “Lie of the Year.”

There was also the Benghazi scandal, often pinned on then-Secretary of State Hillary Clinton, but covered up by Obama and his administration.

Former National Security Adviser under Barack Obama, Susan Rice, claimed in her book that she was pushed to do five Sunday television interviews by the administration to cover for Clinton by insisting that the Benghazi attacks were the result of an obscure YouTube video.

They lied and lied repeatedly on that matter to the American people. But who cares – It’s not as big a deal as that damn suit.

Speaking of covering up deaths at the hands of the Obama administration, does anyone recall a little thing known as Fast and Furious, a gun-running scandal that resulted in the deaths of dozens of people, including border agent Brian Terry?

Obama’s Attorney General Eric Holder was held in contempt of Congress over it. Funny, the DOJ didn’t see fit to charge Holder.

President Obama was in office when Snowden leaked the info about the NSA violating the constitutional rights of literally every American. https://t.co/GW138S5Nxq

Obama was also behind *deep breath*:

A trade of high-ranking terrorists for a traitor, giving Iran access to the U.S. financial system, using the DOJ to try and shut down reporters by accusing them of committing a crime, meddling in foreign elections, using the IRS to punish political opponents, all but ignoring Christian refugees being persecuted in the Middle East, and using law enforcement agencies to spy on an adversary in an attempt to subvert the American election in 2016.

All this is to say that Weinstein is an ignorant DNC shill. The notion that Barack Obama was ‘scandal-free’ or that the biggest offense he ever committed was wearing a tan suit is simply a lie.

Incumbents Are Getting Wiped Out In Primaries At Historic Levels