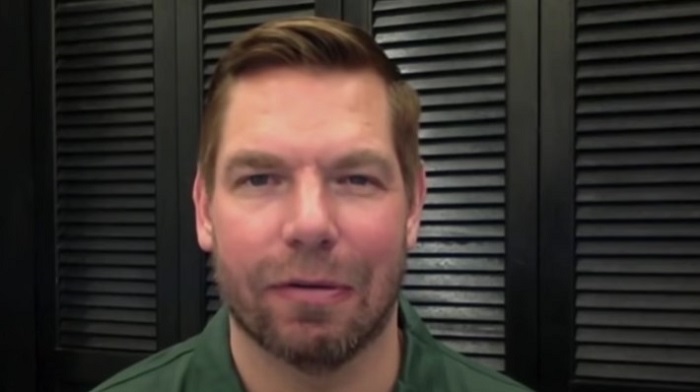 The image, presented as part of the DOJ’s response to Trump’s petition for a special master to review materials seized by federal officials, shows papers strewn on the floor with coversheets indicating the documents are “top secret.”

The FBI was also kind enough to include a box in the image which shows a framed cover of Time Magazine depicting Trump in the White House with a host of political enemies peering in through the window.

Needless to say, some supporters of the President were skeptical that the released image proves much of anything.

Representative Liz Cheney (R-WY), to the contrary, laughably presented it as proof of “indefensible conduct” by the former President.

Swalwell (D-CA) concurred, tweeting the image and making an odd leap in logic claiming that the documents which the FBI waited well over a year to retrieve had imminently put our troops in harm’s way.

“These are the secrets that protect our troops,” he said referring to the coversheets. “Either you want them protected or believe they should be in the hands of a corrupt man who has used U.S. resources before to help himself.”

Swalwell then asked: “Are you with the troops or Trump?” (Remember when the left hated when George Bush made comments like that?)

These are the secrets that protect our troops. Either you want them protected or believe they should be in the hands of a corrupt man who has used U.S. resources before to help himself. Are you with the troops or Trump? #TroopsOrTrump pic.twitter.com/YuVZ8VAxAE

Supporters of President Trump, already skeptical over a politicized attack on the part of the FBI and DOJ, weren’t quite sure what to make of the image.

The term “staged” was trending on Twitter following the photo’s release.

Among the skeptics was Greene (R-GA) who claimed Swalwell’s blind posting of the photo proves he and his colleagues are little more than “dumbasses.”

“So the documents are so secretive that the FBI dumped them on the floor and took pictures of them, so dumbasses like you could post the pics for the world to see,” she scoffed. “You people are so bad at this.”

She then argued out that Swalwell’s alleged relationship with Chinese spy Christine Fang as a member of the House Intelligence Committee makes him an enemy of America’s military.

So the documents are so secretive that the FBI dumped them on the floor and took pictures of them, so dumbasses like you could post the pics for the world to see.

You people are so bad at this.

Btw, sex with Chinese spies puts you against our troops. https://t.co/zPlAI8eLC6

Swalwell’s ‘Spy Who Shagged Me’

Honestly, I feel we have to call out Representative Marjorie Taylor Greene here – Eric Swalwell isn’t intellectually armed to make coherent arguments and fight back. As such, a verbal beatdown like this just seems a bit much.

Just as there is a mercy rule in Little League baseball, there should be a mercy rule for congressmen that make AOC look like a Rhodes Scholar.

Greene’s colleague, Rep. Lauren Boebert, delivered a fiery speech on the House floor this past November in which she also mocked Swalwell for his Chinese spy scandal.

Swalwell who is on the Intelligence Committee, slept w/Fang Fang, a Chinese spy,” Boebert said of Swalwell “Let me say that again. A member of Congress who receives classified briefings was sleeping w/the enemy!”

Swalwell says “if I did anything wrong the FBI would arrest me”
🙄 pic.twitter.com/nqCw7cORML

An Axios report last December indicated that a woman by the name of Christine Fang (aka Fang Fang) “took part in fundraising activity for Rep. Swalwell’s 2014 re-election campaign” and interacted with the Congressman “at multiple events over the course of several years.”

Fang had allegedly served as a Chinese Intelligence operative with China’s Ministry of State Security.

Tucker Carlson says that “U.S. Intelligence officials believe” that a suspected Chinese spy “had a sexual relationship with” Democrat Rep. Eric Swalwell (CA) and that Swalwell’s office couldn’t comment on it because they said that info might be “classified”pic.twitter.com/biV78uVZHB

The scandal has long been forgotten by the corrupt media.

As for the image itself, legal experts have questioned why the FBI would scatter documents of this nature on the floor of Mar-a-Lago and take a picture to be shared publicly through a court document.

George Washington University law professor Jonathan Turley argued that the image leaves “an obviously misleading impression that secret documents were strewn over the floor when this appears to be the work of the FBI agents.”

Notably, this filing includes this picture which is being widely distributed. It can, however, leave an obviously misleading impression that secret documents were strewn over the floor when this appears to be the work of the FBI agents… https://t.co/3P4HZv5wBd

Rep. Andy Biggs (R-AZ) has claimed the photos released by the FBI and DOJ “look staged.”

Greene, in a follow-up tweet, accused Attorney General Merrick Garland of a rogue Justice Department and said he should be “impeached” for conducting a “political war.”